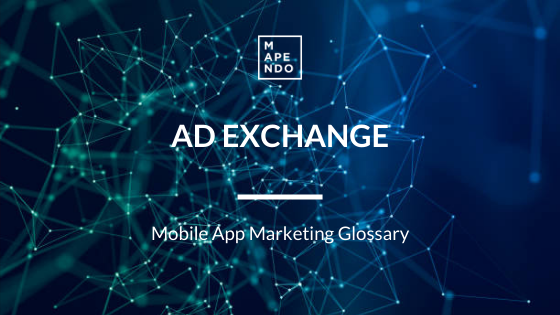 In the anatomy of an app install campaign, and especially in programmatic advertising and real-time bidding, Ad Exchanges play a key role between publishers and advertisers. They connect Supply-Side Platforms (SSPs) and Demand-Side Platforms (DSPs) for real time auctions.

What is an Ad Exchange?

An Ad Exchanges is a digital marketplace, where Demand-Side Platforms and Supply-Side Platforms buy and sell digital ad placements on behalf of advertisers and publishers.

Publishers, which own websites, mobile apps and mobile sites connect to Ad Exchange in order to sell their digital ad inventory, which is collected by Supply-Side Platforms (SSPs). SSPs notify the Ad Exchange whenever an ad space is available, along with data such as location, Internet Service Provider, operating system, size and many more.

Then, the Ad Exchange notifies Demand-Side Platforms (DSPs), which, on behalf of advertisers, bid on a CPM basis to buy that ad space and the highest bid wins. As a result, the DSP which has won the real time auction will show the ad on the publisher’s website or app or mobile site.

DSPs bid on ad spaces based on different targeting criteria they can choose, from ad size and operating system to location and internet connection. Some criteria are usually chosen by advertisers when developing the strategy for the app install campaign. These real time auctions take place in milliseconds and are managed by software and machine learning algorithms.

There are three ways of buying ad spaces within the Ad Exchange:

Ad Exchanges are increasingly popular among publishers and advertisers for app install campaigns because they provide full transparency throughout the process of buying and selling digital ad placements. The risk of fraud is significantly lower than the one associated with affiliate marketing and other platforms related to app install campaigns.

In addition, since the whole process is automated, advertisers and publishers can leverage A.I. technologies such as machine learning algorithms in order to optimize their app install campaigns, save time and money and increase their Return On Ad Spend (ROAS).

Thanks to DSPs, advertisers can avoid negotiating with media sources while having access to a myriad of publishers at the same time. Extensive targeting options provided by the Ad Exchanges allow advertisers to maximize their profit by showing their ad creatives only to the right audience, consisting of users who are more likely to become loyal customers.

What you need to know about Ad Exchanges?