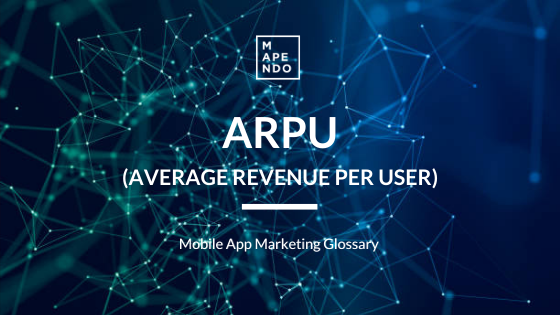 When we have a mobile app, it is very important to keep an eye on some monetization metrics to understand and predict how much profit we can expect from the users who engage with the app. One of these metrics is ARPU.

What is ARPU (Average Revenue Per User)?

The average revenue per user (or per unit), a.k.a. ARPU, is an indicator that measures the revenue generated per user or unit.

It is the total revenue, divided by the total number of subscribers. If you want to get the most accurate ARPU measure, it should be estimated for a given time frame, since the number of units can change daily.

If an app's ARPU is too low, the problem may be that they are underpricing their products and services or focusing too much on low-LTV customers. In fact, one thing that can help increase ARPU is to run price experiments and A/B testing and focus marketing efforts on high-LTV users through CPA app campaigns.

ARPU is going to be high if we have high-quality users, meaning users that generate post-install events and that are consistent in using the app.

What you need to know about ARPU (Average Revenue Per User)