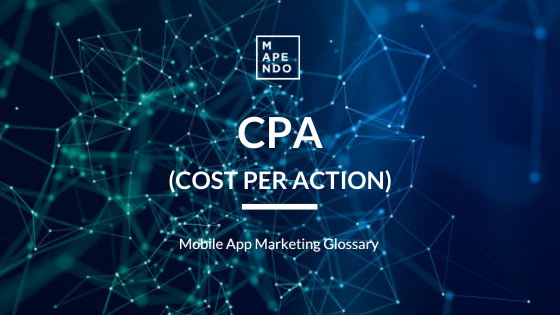 Speaking about app install campaigns, there are different pricing models, that is to say the ways in which advertisers pay DSPs (Demand-Side-Platforms) or other media sources, and CPA is one of the most effective ones. Let’s find out why.

CPA (Cost per Action) is a payout model in which the advertiser pays the publisher only when a user performs some kind of action inside the app like subscription, purchase, or any other post-install event, after having engaged with the ad placed. The action agreed is set taking into account the app KPIs (Key Performance Indicators): the advertiser will choose an action coherent with the goals of the company so that whenever that action is performed, it brings benefits to the advertiser.

Together with CPA, these are the most frequent pricing models in mobile app marketing:

There is no single method suitable for all app install campaigns, and each of these models will best fit different purposes. The choice of the pricing method will depend on the kind of app, on its purposes, and more in general on the overall App User Acquisition Strategy and the main goal of the app install campaign. For example, CPI can be used in those campaigns where the advertiser is mainly interested in growing its app user base, while CPA campaigns focus on the acquisition of high-quality users. These users are the most likely to perform that given action, drive revenue and therefore help to increase the ROAS (Return on Ad Spend) of the company’s app install campaign.

CPA app campaigns are particularly popular as they bring several benefits. Firstly, with CPA the advertisers are guaranteed to find the most interested customers and to only pay for them. The second important element to underline is the economic aspect: CPA app campaigns are safer for advertisers, as they will pay only after the users’ action, and so only after they have already generated revenue. This is an important difference with the CPI model, as installs alone do not necessarily bring profits.
As a matter of fact, in an app install campaign it is also possible to switch from one model to another in order to increase profits if a CPI campaign no longer fits the purpose of the company. For example, an advertiser may start with a CPI campaign and, after having grown its app user base, decide to change the goal to increase profits and switch to a CPA campaign - more suitable for this purpose.
In addition, even when running a CPI campaign, it is also possible to calculate the eCPA (Effective Cost per Action). This can be obtained by dividing the total cost sustained for that campaign, by the number of payable actions in a preselected time frame. In conclusion, the eCPA is significant as it gives an insight into the advertising costs for those in-app events happening down the user funnel and that generate revenue. It is also useful as, from those results, advertisers may also decide to optimize the CPA campaign in order for them to lower the cost per action.

What you need to know about CPA