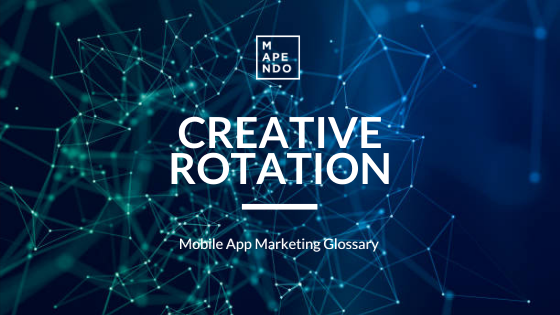 In mobile app marketing creative rotation is a key tool for advertisers to optimize their app campaign performance and their user acquisition strategy.

What is Creative rotation?

Creative rotation is the practice of rotating several ads within an ad group. It is a practice that is used for app campaign optimization to avoid showing the same creative for an extended period of time.

You can, for instance, launch a campaign with a small group of creatives and then rotate it with a new one later. Then you have to observe the results and optimize the app install campaign in a way to show the ads that drive a higher number of installs and conversions. You can evaluate their performance based on metrics and KPIs.

With creative rotation, you can change different ad formats and choose from banner ads, native ads, video, playable ads and interstitials. Each of these creative ad formats has a different impact on the performance of your app install campaign. Each type of banner has its own pros and cons. For example, banners are the most commonly used ad formats in programmatic mobile advertising campaigns and can be displayed in any mobile app or website. But we talk about "banner blindness" to indicate the fact that the user tends to avoid the banner altogether, ignoring its content.

In this context, creative rotation is very useful because it helps you work on app campaign optimization: you can rotate banners with other formats such as video that can attract attention more easily and engage the user or interstitials that inevitably grab attention as they take up the whole screen.

What you need to know about Creative rotation?