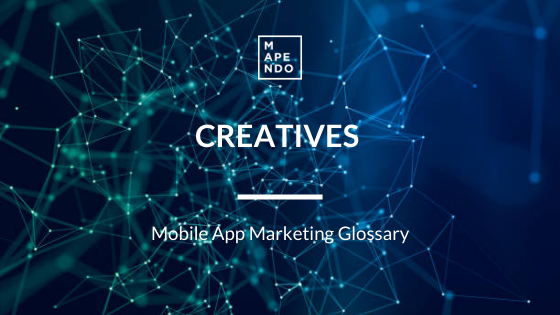 Creatives are the ads which promote advertisers’ apps and are shown to users within publishers’ websites and mobile apps. Therefore, creatives are essential to the results of the app install campaigns because they should attract users and persuade them to download the promoted app. Creatives need a convincing call to action and a captivating design in order to appeal to mobile users and make them install the app.

There are different types of ad formats which can be used for app install campaigns, and the most common ones are:

Each one of them has its own pros and cons. For example, videos are one of the most engaging ad formats, while banners are the most popular because they can be displayed everywhere.

Interstitial ads are display ads which cover the entire mobile screen and can be also more interactive than standard displays. Playables instead are used especially to promote mobile games because these kind of ads provide users with a preview of the game before they even decide whether or not to install it.

Native Ads are those ads which match the user experience of the mobile app or website users are visiting. For instance, when users are scrolling down their Twitter feed, the ad will be shown to them in the form of a Tweet. Therefore, native ads are the less intrusive ad formats and generate high engagement from users.

Moreover, different types and sizes of the creatives means different costs for ad networks and Demand Side Platforms (DSPs) in order to display those creatives in their app install campaigns.

Why are they important?

Advertisers, and marketing partners on their behalf, can rotate multiple creatives in order not to show users the same ad format over and over. Furthermore, they can run creative A/B tests to assess the performance of each creative and maybe allocate more budget on the best-performing ad formats.

What you need to know about Creatives?