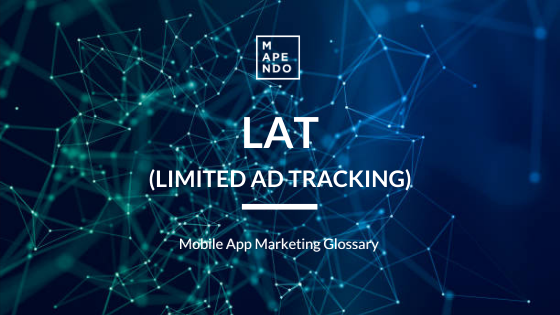 In mobile app marketing, Limited Ad Tracking (LAT) existed already before iOS 14 privacy features and the introduction of the ATT (App Tracking Transparency). Let’s see what it is.

What is Limited Ad Tracking (LAT)?

In the context of app install campaigns, it is important to be aware of the existence of Limited Ad Tracking (LAT). In these years when there is a growing concern about privacy, users who activate the feature might do so to avoid data collection because they are aware that they are being tracked.

Prior to iOS 14 and the introduction of the ATT (App Tracking Transparency) prompt, the Limited Ad Tracking (LAT) was the primary way iOS users could choose not to share their IDFA. Now all users on Apple devices running iOS 14 or later versions are instead shown the ATT prompt, and only if they opt-in by selecting "Allow Tracking" their IDFA will be shared, otherwise, if they opt-out, their IDFA will be hidden. So, in iOS 14 everything is more explicit.

So, does this mean that with Limited Ad Tracking (LAT) active users will not be shown ads anymore? Of course not! Users will be shown ads, but they will not be targeted at them based on their behavior and activity on their device since their personal data is protected.

Ad tech companies can still collect some data, but there is no more personalization. This means that a user will not see ads personalized according to their personal activity on their device (because the IDFA is hidden and their device has no identity), but the personalization of ads will be limited to contextual data such as:

As mentioned earlier, Limited Ad Tracking hides the IDFA and, in the context of app install campaigns, it makes it more difficult to track post-install conversions.

What you need to know about Limited Ad Tracking (LAT)