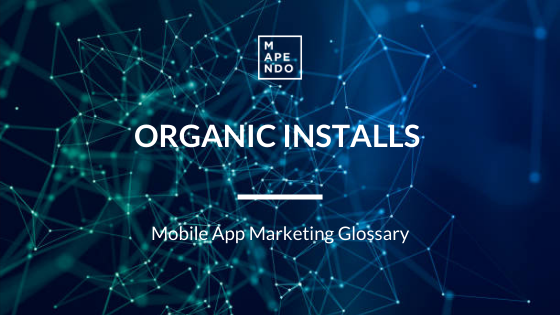 When talking about mobile apps and especially mobile user acquisition, app installs may occur in different ways and following different paths. In general, we can make a distinction between organic installs and non-organic installs: the difference between the two lies in the source driving the app install. Let’s investigate the topic more in depth!

What Is An Organic Install?

Organic installs are app installs that occur spontaneously from the user’s side, that is to say, without having been influenced by marketing efforts or strategies of mobile user acquisition. Users may find out about that given app on their own, by word of mouth, or by a simple search in an app store.

Organic installs differ from non-organic installs, as these latter are those app downloads happening as a result of an advertisement or other marketing activities part of the process of mobile user acquisition on different media.

We also need to add the fact that the app download may also be influenced, to some degree, by an ad, but the link between the engagement with an ad and the app install (or other in-app events) may not be unmistakable. For this reason, in the field of mobile app marketing and mobile user acquisition, the so-called attribution window is defined as the time frame between the engagement with the ad and the app install.

The shorter this time frame, the higher the chances the app install (or desired action) was driven by that ad. If a user sees an ad or clicks on it, and downloads the app after the attribution window is over, we cannot know whether that download was driven by that ad or not - and it is therefore considered an organic install.

Why Are Organic Installs Important?

Organic installs are considered so important as they tend to provide high quality users, those who have found out about the app and downloaded it on their own.
‍

For this reason, they are regarded as genuinely committed and interested app users and, as a result, those users may have the highest potential in terms of ROI and Lifetime Value (LTV).

Another important aspect of organic installs to keep in mind is the economic side: organic installs do not need to be paid for when the install occurs, thus making you save also on CPI (Cost per Install).

As they matter so much in mobile user acquisition, there are some ways in which you can scale Organic installs. Some of these strategies include promoting the app through word of mouth or improving your ASO (App Store Optimization) strategy to increase the visibility of the app in app stores.

What You Need To Know About Organic installs