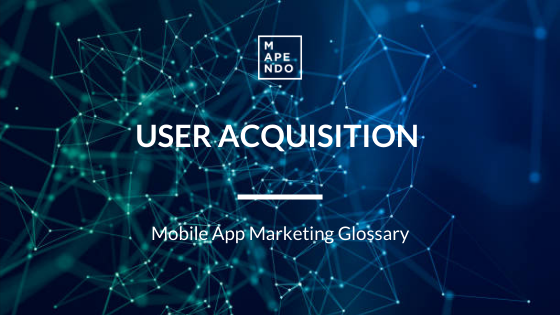 In the field of mobile apps, one of the key goals for achieving success is to acquire as many users as possible. The process of acquiring new users is called user acquisition, or UA, and the two main forms of user acquisition are organic and non-organic (or paid) acquisition.

The difference lies in the source driving the app install: installs can be defined as organic when they are not prompted by any marketing activity but happened spontaneously because the user decided to install the app.

What Is User Acquisition (UA)?

User acquisition can be defined as the strategy employed to drive new users to an app, achieved through marketing and advertising campaigns. The main marketing activities we are going to focus on here include paid media marketing, owned media marketing, and app store optimization (ASO).

Paid media marketing uses media channels to show users ads designed to prompt an immediate response and action – like encouraging users to install an app. Paid media marketing may involve, for example, the use of targeted banners and ads on social media networks.

In this respect, this is what happens over the course of every app install campaign: app developers rely on marketers to publish their ads (in different formats, such as banners, videos, native ads, or GIFs) across different platforms, paid media, and app stores. Therefore, this is a way of driving non-organic installs, as users will see an ad, possibly engage with it, and download the app.

This is made possible by the use DSPs and marketing partners make of programmatic technologies, machine learning algorithms, and A.I. In an app install campaign, such sophisticated technologies are the key to the identification and acquisition of high-quality users. In fact, through programmatic, DSPs are able to target users according to different criteria and identify those who will engage more with the app, thus contributing to the increase of in-app revenues.

Indeed, paid user acquisition strategy is set up on the basis of data collected by machine learning algorithms, thus providing more precise and concrete insight about the app install campaign and its performance, guiding app marketers toward the most effective steps to be taken next.

For all these reasons, the budget and efforts dedicated to the development of a good paid user acquisition strategy in an app install campaign are constantly rising.

On the other hand, owned media marketing are the tools used with the purpose of driving web users to an app, thus becoming app users, such as email targeting, SMS, or other similar media.

Why Is User Acquisition Important?

When talking about a mobile app install campaign, one of the core goals is acquiring new users and generating installs: for this reason, an effective user acquisition strategy is the first thing app advertisers need.

User acquisition is a key tool in finding and converting new app users. Indeed, a good user acquisition strategy is crucial in boosting the app installs, and as a result its ranking in app stores – because the number of installs is a highly-considered factor in app stores and their algorithms.

An effective user acquisition strategy is important to support organic installs, those installs happening without a direct influence from ads or other marketing efforts, as well as to contrast the recent decline in the number of such kinds of installs.

Together with this, paid user acquisition is also a way of increasing the app install campaign ROAS as the use of machine learning algorithms and A.I. allows the acquisition of high-quality users.

What You Need To Know About User Acquisition