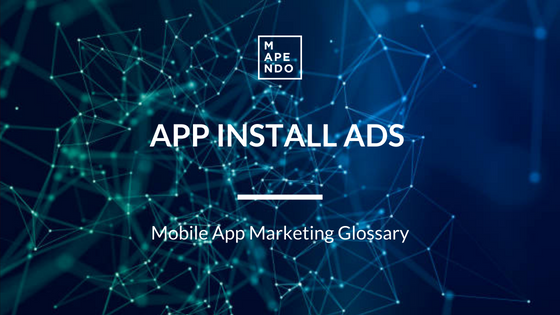 Mobile apps have quickly become part of our everyday life. We use them to chat with friends, order food, watch movies and TV shows and a lot of other on-demand services. According to the latest industry report by Data.Ai, people spend approximately 5 hours per day using mobile apps, and this number is expected to grow in the coming years.

This ever growing trend results in a dramatic growth of mobile apps published in both Google Play Store and Apple’s App Store and, as a consequence, in a tough competition for getting new users. Indeed, industry experts underline the importance of app install ads as the best way to acquire new users and grow your mobile app, standing out in the heavily crowded marketplace. But what app install ads are ? Let’s take a deep dive into it.

What are app install ads?

App Install Ads are advertisements which contain deferred deep links, that bring users who click on the ads directly to the app store, Google Play or App Store depending on the operating system. These ads achieve success when users download the promoted apps and open them for the first time.

As the name suggests, App install ads are specifically designed to generate app installs and therefore they should be the core of any advertiser’s paid user acquisition strategy. What advertisers need to do is only to produce creatives for the ads, set goals for their strategy and provide a budget. Then, marketing partners such as ad networks and mobile DSPs will do the rest.

App install ads can have different formats and each of them has unique benefits and drawbacks. Thus, multiple ad formats should be tested in order to assess their effectiveness in attracting users. Here are the most common ad formats:

The choice of ad formats depends also on the category of the promoted app, because some creatives perform better than others based on the app category. For instance, videos are amongst the best performing ad formats for mobile games, together with playable ads, which allow players to test a preview of the promoted game.

Banners are less expensive than the other formats and they can be placed everywhere, while native ads are meant to replicate the format of the content shown in the app publisher, in order not to interrupt the user experience and be too intrusive.

How do App Install Ads Work ?

Advertisers can choose one or more platforms to run app campaigns with, both self-serve platforms like Google UAC or Facebook Ads Manager and fully managed platforms, where teams of people take care of the paid user acquisition campaigns. App install ads will be shown in social media, mobile websites and mobile apps and will target users according to parameters and criteria set by advertisers.

Once users click on the ads, they will be redirected to the app store, where they will be able to download the promoted app. The SDK implemented inside the mobile app will allow software platforms called Mobile Measurement Partners (MMP) to attribute the installs to the ad, and the paid campaign/channel, which generated it. However, the install is attributed successfully only once users have opened the app for the first time.

Why are app install ads important?

Top experts in mobile growth and app marketing industry state that app install ads are crucial to any effective paid user acquisition strategy. Naturally, mobile user acquisition includes both paid and organic marketing activities and channels, but app install ads are uniquely designed to drive installs and this makes them too valuable to be overlooked.

Furthermore, a massive growth in paid installs, and a subsequent increase in the app user base, usually leads to a better ranking in the app store, be it App Store or Google Play, helping both App Store Optimization (ASO) and organic installs.

Last but not least, tech companies which work with programmatic platforms can leverage machine learning algorithms to optimize app install ads towards so-called “high-quality users”. This means that app install ads will be shown mainly to people who are more likely to generate some post-install actions valuable for the app developers, possibly tied to their business KPIs. Those users are likely to become loyal customers for the promoted apps, driving revenues and making the app campaigns ROAS positive.

What you need to know about app install ads