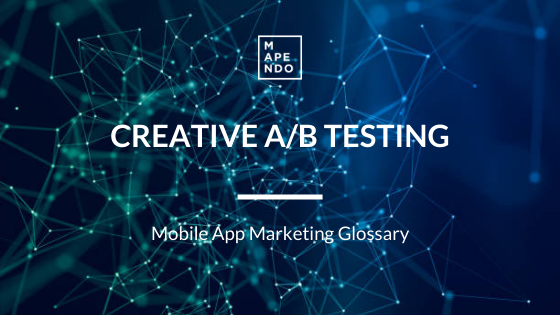 Creatives are a central part in a successful paid user acquisition strategy. App install campaigns can work with many creatives and different ad formats but not all of them are effective in achieving results. Creative A/B testing is a powerful tool to assess the performance of different creatives.

What is Creative A/B Testing?

The results can be measured as installs or in-app events based on advertisers’ KPIs and the app install campaign’s model. Indeed, you can observe and measure multiple metrics in order to evaluate performances. Some examples could be conversion rates, ad spend, ROAS, CPI, CPA and so on.

Creative A/B testing helps advertisers to assess the performance of different creatives in order to optimize app install campaigns. By allocating more budget to the best performing ads you can avoid wasting money on ad formats which do not drive conversions. Furthermore, it is crucial to run multiple creative A/B tests over time to come close to a clear understanding of which formats attract users more than others and why.

There are many ad formats which can be used in app install campaigns, and each of them has benefits and drawbacks. For example, some creatives such as interstitial and playable ads are generally more effective at attracting users for mobile games rather than utility apps. Or, videos are more engaging than banners and displays, which instead are less expensive and can be easily shown everywhere.

Thus, creative A/B tests allow marketers and advertisers to understand which creatives work best and why. As a consequence, they can either spend money on the top performing ads or try to produce creatives similar to those, excluding the worst performers.

What you need to know about Creative A/B Testing?