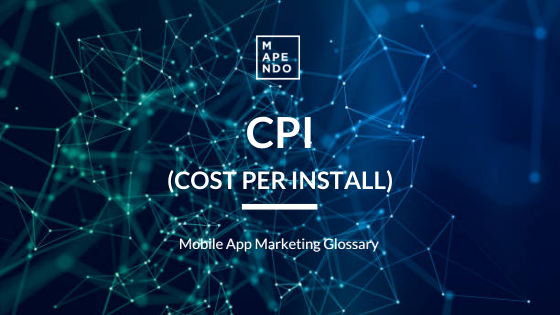 Cost per install (CPI) is one of the main metrics used in Mobile User Acquisition.

It is defined as the (equivalent) cost needed to generate an app install. The target of Mobile User Acquisition is to increase the number of active users for mobile apps.

What is Cost Per Install (CPI)?

CPI is a pricing model used in app install campaigns, which sets the price the advertiser has to pay to the publisher (DSPs, Demand-Side-Platforms, or other media sources) every time their app is installed and opened as a result of an app install campaign. So, it is different from the CPA strategy, in which the advertiser has to pay only after some post-install events performed by users (item purchase, registration and so on).

CPI is a fixed price. It means that no matter how much media space (i.e. impressions, clicks, …) is needed to generate the install the price stays flat.

In case the advertiser is paying for clicks or impressions, it might be interested in calculating the eCPI (equivalent Cost per Install – the actual price paid for installs), by dividing the total spending invested in the marketing campaign, by the number of app installs.

It is useful to calculate the eCPI also in a CPA campaign (where the advertiser pays the publisher only after a post-install action) to determine the corresponding price for install. This is important to estimate the Customer Acquisition Cost (CAC) and the ROAS of the app campaign.

Why is Cost Per Install so important?

This is important as it helps the advertiser save money and take less risks, in other words increasing the ROAS (return on ad spend).

The second important element of success is the fact that CPI is actually a good index for your app campaigns, as the number of installs (roughly equivalent to the number of the users) is a very important app growth metric. Not all app installs are generated through mobile advertising campaigns, so the average Cost per install calculation must take into account also organic installs.

Cost per Install campaigns are very good to generate app installs, thus bringing in new users for mobile apps. There are also other kinds of app campaigns, for example CPA app campaigns, focusing on user engagement rather than app installs. A Cost per Action based strategy may be more suitable when the advertisers need to be extremely cautious about in-app engagement.

When you bid CPI you usually pay a fixed price. You set the CPI then the mobile DSP (or the Ad network) generates as many installs as possible at the prices you have set. Obviously the number of installs depends on the conversion rate of the app.

In case you want to use a dynamic CPI or you want to calculate the equivalent Cost per Install (eCPI) you can use the following formula:

Cost per Install by Country

Obviously Cost per Install prices tend to variate a lot, depending mainly on:

Let’s focus on the variations of Cost per Install by Country, as these differences are crucial while setting up an app install strategy. CPI prices tend to reflect the cost of media in any given country.

Here are some statistics about CPI prices (as of early 2022, data coming from various sources such as Appsflyer, Moloco, Applovin and others):

How are Cost per Install prices changing in the coming months and for 2023?

What you need to know about CPI

In a nutshell, here are some notes about Cost per Install: