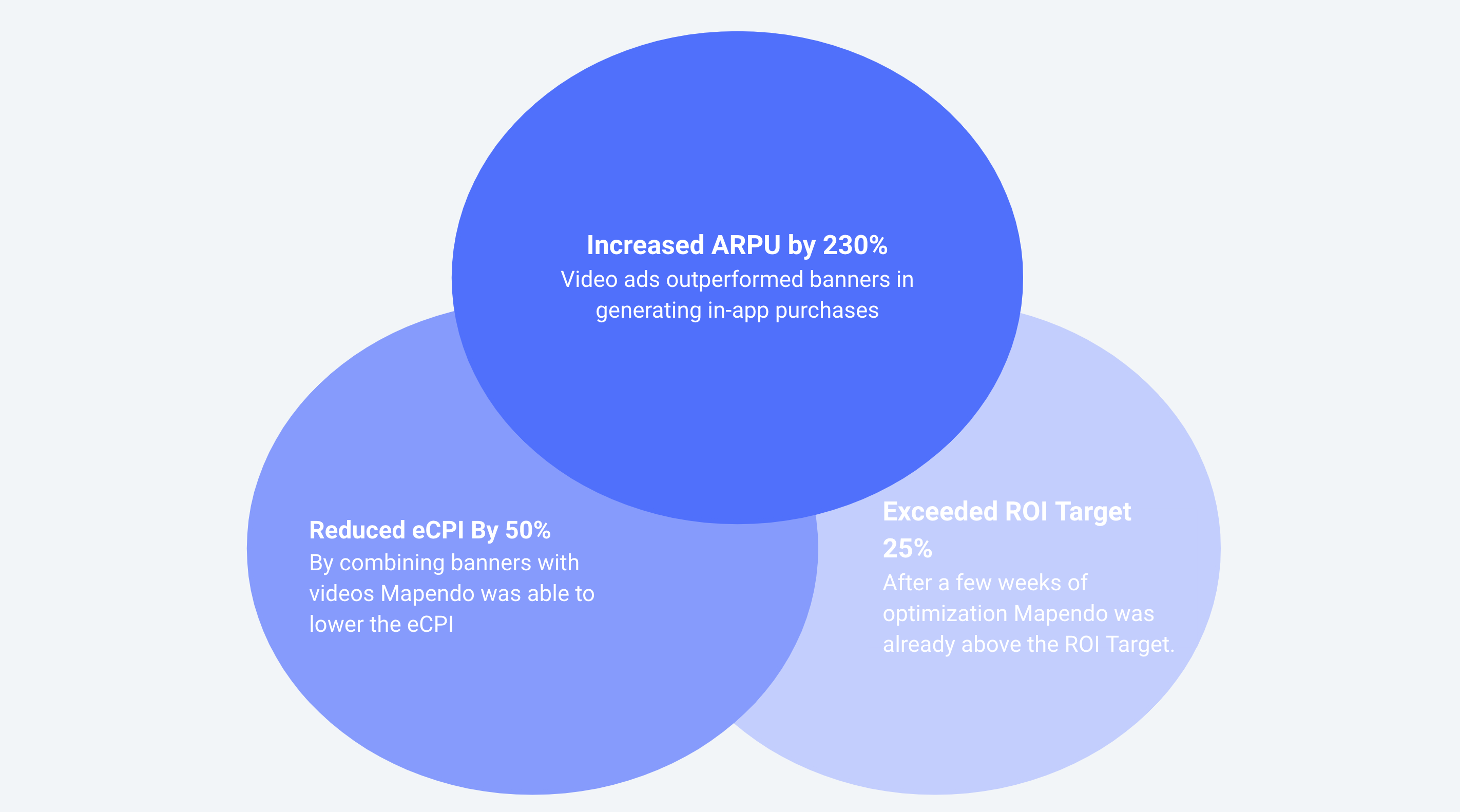 When playing clicker games users have to perform some simple action (hence the name that refers to just clicking) in order to earn currency that they can use to unlock new content in the game. Usually clicker games also let the users unlock content by paying to enter new levels, or enhance their abilities in the game.

Clicker games are becoming more popular, they are often considered part of hyper-casual or casual games, even if they require some strategy and ability to perform actions inside the game.

Another name for clicker games is idle games.

Mapendo has been working with a well known idle game aiming at generating new downloads and new players. We’ve been starting running the campaign with banners, generating new installs at a very cost-efficient rate.

Starting a Cost per install Campaigns running on banners

Some might think that banners are old and not efficient anymore. This is totally not true, banners are still relevant and very efficient for app install campaigns. Here are the three main reasons behind our choice (together with our client) to use banners to start up the user acquisition strategy for this clicker game:

1. Banners have a huge reach. It’s easy to reach millions of users every day. Generating so many impressions and clicks drives dramatically up the performance of app install campaigns, but at the same time it exposes the brand of the game to a wide audience, helping make it popular.

2. CPM is cheap and the equivalent Cost per install is good. In our case we managed to reduce cost per install by around 50%, by optimizing the creatives and the apps where we have shown our banners.

3. Testing new creatives is quick. Our technology generates dynamic banners that use the app’s assets on the store. This is a lot cheaper than creating video creatives or playable ads.

Our client wants to acquire new users, but the strategy for user acquisition prioritizes the ARPU and obviously ROI of the app install campaign. We have tested video ads because we wanted to:

After a few days of run we’ve seen the first in-app purchases coming in. In the first two weeks of run the purchase rate of the users coming in through video ads was around 20% higher than the campaign using banners.

In the next two weeks we did some optimisations, in order to improve the purchase rate and ROI. After one month ARPU generated by the video campaigns outperformed ARPU of users that clicked on the banners by around 230%.

After three months of running our campaign generates around 70% of the volume through banners and the rest through video ads. But the ARPU of the video campaign is way higher, covering the high cost of video traffic (thus justifying a higher eCPI) and generating a good margin for the advertiser.