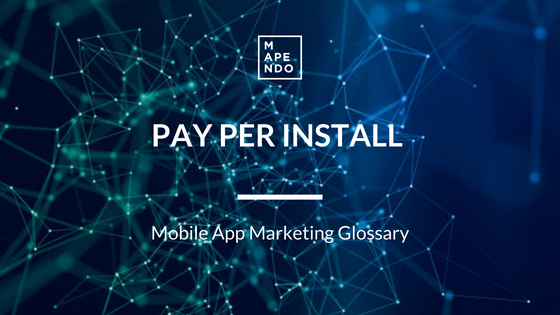 Pay per install (PPI) campaigns are a popular method for promoting apps, particularly in the gaming industry. These campaigns involve paying a publisher a fixed amount for each installation of an app that is attributed to their promotion.

A publisher in the mobile advertising for apps ecosystem is a source of traffic for a campaign: it could be an app, a site or an influencer, using her followers base to promote an app. Basically the publisher is any kind of traffic source that gets paid for promoting an app.

Pay per install refers to the payment model used by the advertisers, while middlemen in this market (DSPs or SSPs) may also use other payment models.

There are two main payment models for PPI campaigns: cost per install (CPI) and cost per action (CPA). CPI campaigns pay the publisher or influencer a fixed amount for each installation of the app, regardless of whether the user takes any further action within the app. CPA campaigns, on the other hand, only pay out when the user takes a specific action within the app, such as making a purchase or reaching a certain level in a mobile game.

Whatever the payment model is, every pay per install activity needs traffic in order to generate installs and events. And two main traffic channels are programmatic platforms and affiliate networks.

Programmatic networks are platforms for buying and selling ad spaces in real-time using automated systems. These networks are increasingly being used for cost per install (CPI) campaigns, particularly for mobile apps. Programmatic networks allow for highly targeted and efficient ad buying, which can be beneficial for CPI campaigns. Advertisers can use data such as demographics, browsing history, and location to target specific audiences. Furthermore, programmatic networks leverage contextual targeting, especially after iOS 14.5 has been released and has made it difficult to adopt behavioral targeting.

This can lead to higher conversion rates, as the ads are being shown to users who are more likely to be interested in the app. When you buy programmatic traffic for pay per install activity there is a risk involved in the buying model, as the traffic is not sold on a fixed basis (while pay per install requires a fixed cost per install).

But programmatic traffic generally offers a bigger quality than other types of traffic, in terms of ROI and also in terms of precise targeting.

Affiliate campaigns for apps, specifically for gaming apps, are a way for app developers to increase their user base and revenue. Affiliates, such as gaming influencers (or video channels, news sites, ..), promote the app to their followers and receive a commission for each installation or in-app purchase that is attributed to their promotion.

Affiliate pay per install campaigns can be highly effective for app developers and software companies as they allow them to reach a large and engaged audience through the use of influencers and bloggers. These individuals (or sites/apps) have already built a relationship with their followers (users) and have a level of trust with them, which can lead to higher conversion rates.

One of the main advantages of affiliate campaigns for apps is in the payment model. The advertiser can pass to the source the fixed payout model, decreasing the risk.

A very special kind of affiliate campaigns for apps is influencer marketing. Influencers might use their followers base in order to generate conversions for app campaigns.

In conclusion, Pay per Install campaigns are a popular method for promoting apps, particularly in the gaming industry. These campaigns involve paying a publisher or influencer a fixed amount for each installation of an app that is attributed to their promotion. There are two main models for PPI campaigns: cost per install (CPI) and cost per action (CPA). Programmatic advertising and affiliate campaigns can also be used to promote apps, which can be efficient and cost-effective.