DSP, SSP, AD Exchange And More: Who Are The Key Players In Mobile Programmatic 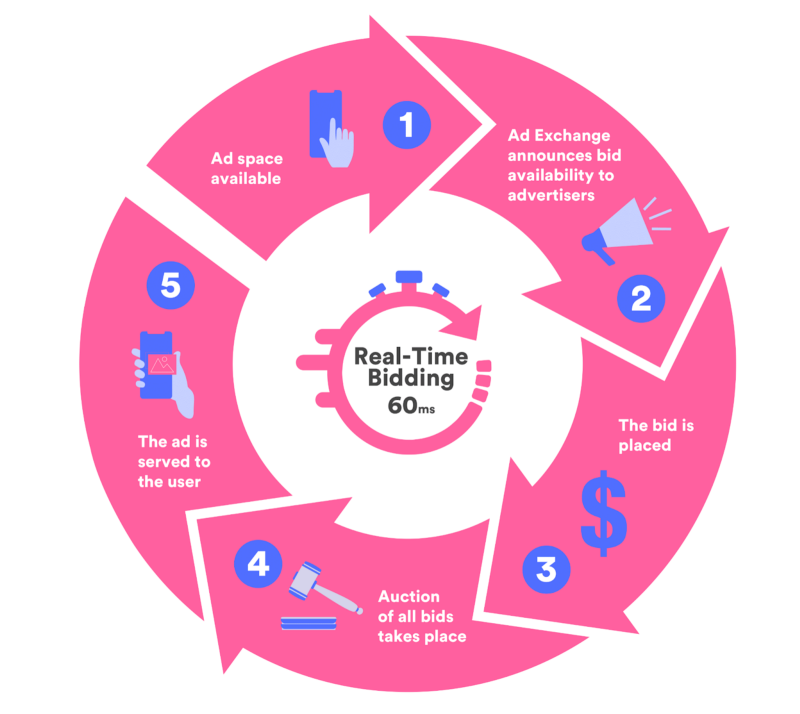 Blog
>
Marketing
>
DSP, SSP, AD Exchange And More: Who Are The Key Players In Mobile Programmatic

We always say that mobile programmatic is an effective way to scale app install campaigns, and a fundamental tool in every mobile user acquisition strategy.

In brief, mobile programmatic is the automated buying and selling of ad inventory: that is of course true, but who are the actual players in the process? Let’s dig deeper into this topic.

The key players in mobile programmatic are:

Let’s start off with the first one, DSP. The acronym DSP stands for Demand Side Platform, and it is used to describe a software platform supporting advertisers.

A DSP does so through the use of machine learning algorithms and AI, thus being able to target those users that are more likely to interact with the ad and generate in-app revenue — high-quality users — central in app campaign optimization.

For this reason, we can definitely say that a DSP allows advertisers to have a much greater targeting ability and, as a result, is fundamental in app promotion in investing the available budget better and increasing the app install campaign ROAS — which is your goal when working for app campaign optimization.

In mobile programmatic, a DSP is a facilitator of the relationship between advertisers and publishers. Before the introduction of DSP, app install ads in the digital world were sold and bought by ad buyers through manual negotiations, while DSPs allow automation of this process.

So, they are a major part of mobile programmatic and key in app campaign optimization: they provide a faster and more efficient way for advertisers to purchase ads, as well as a better allocation of the user acquisition budget.

The other side involved in the process of mobile programmatic is the SSP — Supply Side Platform. SSP is basically the opposite of DSP, as it is a platform or software used by publishers wanting to sell ad space. SSPs make the process of selling ad inventory easier and safer, as they automate the management of ad inventory and the sales of publishers’ media space.

Before the appearance of SSP, publishers used to manage and sell their ad space manually, while nowadays the selling of ad inventory, in mobile programmatic, is fully covered and automated by the SSP. The SSP sends ad impressions to ad exchanges, which then sell them for the best price offered by buyers (DSPs) during bids.

So, this brings several benefits in mobile programmatic and app campaign optimization. Firstly, an SSP is a facilitator, working in between publishers and advertisers, and it makes the process of selling ad inventory easier and faster.

Together with this, SSP gives publishers more control over pricing and maximizes their revenues: each SSP guarantees publishers they sell their available ad space to the highest bidder, thus providing more revenue for each ad space sold.

The third player in the system of mobile programmatic is ad exchanges. Ad exchanges are digital marketplaces for the buying and selling of digital advertisements. They can be described as a third-party platform facilitating the work between the supply side (SSP) and the demand side (DSP): publishers can use an ad exchange to sell ad space, while advertisers use it to buy ad space.

Why are ad exchanges important in mobile programmatic? Ad exchanges provide a great amount of data to DSPs, so that they can make their offer and reach the best deal. Moreover, as they rely on machine learning algorithms, they provide a more transparent way to buy and sell.

The exchange of ads is like a bid, in which publishers can get the best price and advertisers can reach their target high-quality users: so, to conclude, another benefit of working with ad exchanges is the fact that they maximize profitability for both the supply and the demand side.

We can now briefly describe the two “end-sides” involved in the advertisement for mobile apps and mobile programmatic. The first one is the advertisers: advertisers are clients, app developers wanting to advertise their product — their app.

To do so, they need to buy ad spaces, so that the ad for their product can be seen by the highest number of users. They rely on DSPs, as they can place the ads for their app in the best place and especially targeting high-quality users, those who can be more interested in the app, install it, and perform post-install events — generating revenues.

On the other side we have publishers, the ones selling ad space to advertisers, the ad space necessary for them to place the ads for their app. Publishers can set some rules, such as a certain minimum price for the bid to start, not to make too little money, or they can decide to sell ad space only to some given categories excluding some others (gambling, for example).

Advertisers then have to stick to those rules and find the ad space that best suits their product and purposes. Together with this, similarly to what publishers can do, advertisers can also decide not to buy ads on some categories of mobile apps, like mentioned above.

In summary, these are the key actors involved in mobile programmatic, a marketing channel which is essential in app campaign optimization, in increasing the app install campaign ROAS, and in the acquisition of high-quality users.